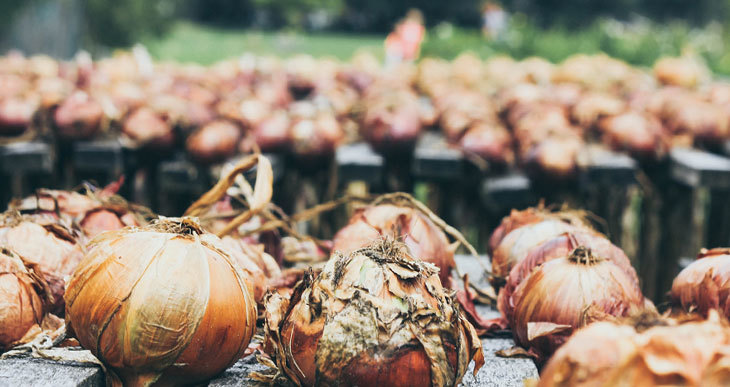 Can you Compost Onions? The Truth about Composting Onion Waste

I admit it... I like to cook. And I reckon I put onions in just about everything I make! What’s a Bolognese sauce without onions… Eh? So as a result I have my fair share of vegetable scraps. And as a keen composter I obviously began to wonder whether I can put onions in my compost bin?

It turns out this bulbous vegetable has an “unsavory” reputation in the composting world (pun intended).

So can you compost onions? In short, yes. Onions are a source of organic matter like any other vegetable. But it depends on what type of onion waste you’re thinking of putting in your compost bin. Onions can be composted, but with a few caveats. And some composting methods can be more effective than others.

Plenty of gardeners add onions to their compost without any adverse side effects. Nevertheless, there are a few precautions you need to keep in mind...

Onions are one of the oldest vegetables known to man, with evidence of them being cultivated in the bronze age. That’s 5000 years ago! And they’re still one of the world's most popular vegetables.

But as we all know from experience, these veggies have a very strong smell and release a volatile gas when we chop them up. This may be one of the reasons people have doubts about putting onion waste on their compost heap.

I’ve read some conflicting advice about how to deal with these types of vegetables. In some extremes it’s advised not to compost them at all, arguing that their acidity affects the microorganisms in your compost. At the other end of the scale, others say that if it rots, you can compost it​!

So what’s the bottom line?

Follow the tips below for better results (This advice also applies to other members of the onion family like shallots, garlic, and leeks).

Onions have a relatively low pH, which means they’re acid. This is one of the reasons some people advise against putting them in compost. And it’s said that onions have an inhibiting effect on bacteria which makes them longer to compost.

​Bacteria in a compost pile is a good thing and it’s responsible for the majority of the hard work, so in theory anything that destroys bacteria is bad.

This being said, a lot of common sense composters add onions to their bins without any adverse effects. So long as you are not adding excessive amounts, the “negative” properties of onions will be balanced out by the rest of the rotting material.

Compost is generally alkaline in nature, and the acidifying effect of onions is balanced by the other material you mix in (chalk or crushed egg shells can be added to balance the acidity if you include large amount of onions).

It should be noted that if you’re soil already has a high pH, it may be a good idea to avoid making alkaline compost. Knowing the pH of your soil so you can compensate is important and easy to do with a soil pH meter like this one which also measures moisture levels.

It’s true onions have a strong odor. And they tend to be even more pungent as they rot! To alleviate odors in an open compost bin you can bury them under about 12 inches of other material. Adding shredded paper or cardboard is another useful aid to combat smelly compost. Be careful to cover them up again when you turn your pile. 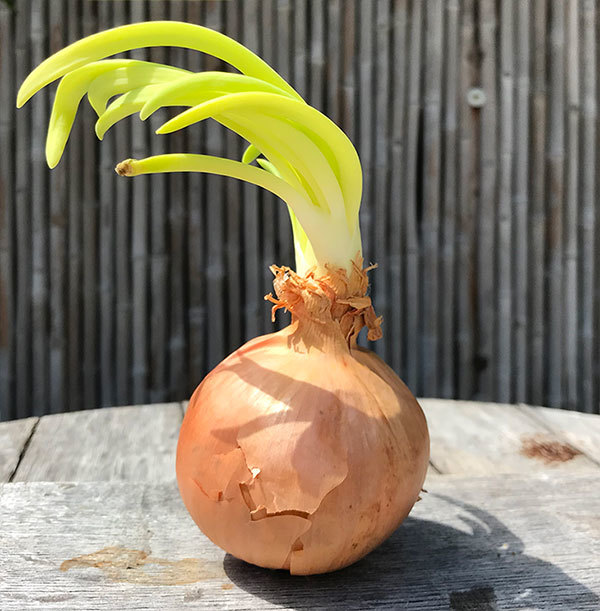 The general advice when it comes to whole onions is to cut them up before putting them into compost.

Remember those onions you left too long and they began to sprout? This is the reason why you need to cut them into smaller pieces. If you forget about them long enough onions will try to reproduce, which is why you see them sprouting. By chopping them up you’ll avoid them growing inside your compost bin.

And as with anything else you compost, the smaller the pieces, the quicker they will start to break down. You’ll be giving your compost a helping hand.

(Storage tip - gases from onions can make potatoes sprout. Don’t stock them with your spuds).

Can you Compost Moldy Onions?

You may have some onions that are past their prime. So much so that they’re starting to go moldy. You can put these into your compost without any worries. Mold is fungi and it’s a natural part of the decomposition process. You’ll often find mold growing in your compost bin as the fungi starts to break down organic matter.

So putting moldy onions in your compost means you’re already part of the way there. To be safe, be sure to chop whole onions as in the advice above.

Any diseased plants should be avoided in a compost bin. If you have a crop of onions that have been ruined by  a pathogen like leaf blight, onion mildew, or white rot, dispose of them in another way.

On a side note, it is true that hot temperatures in compost can eradicate certain pathogens. But most common backyard composting doesn’t reach very high temperatures. So you shouldn’t rely on this “thermal kill” technique.

Best not to take risks with diseased onions to avoid reintroducing the problem back into your soil when you apply the compost.

Don’t like to waste stuff? If you like, you can burn the diseased onions, and add the ashes to your compost.

​Use untreated wood for burning, not charcoal which usually contains unwanted chemical residues. Wood ash is alkaline and a good source of potassium.

Onion skins and peelings are a normal part of general household kitchen waste when you cook. You can compost these without any kind of pre-treatment.

The problem with cooked onions is that they have been heated in fat. Compost heaps have difficulty breaking down anything containing grease and fat. The fat can also spread over other materials and prevent them from composting.

The smell of food cooked in fats can attract pests such as rodents. These uninvited guest will make a mess of your pile!

Worm composting or “vermicomposting” is becoming very popular. However, it’s generally recommended to steer clear of onions in a wormery.

A worm environment needs to stay close to pH neutral. And as discussed above, onions contribute a high level of acidity. Also, worms breathe through their skin, and onions can irritate their breathing system.

​Worried about the worms in your ordinary compost bin? So long as you’re not trying to run a worm compost heap by adding additional worms, onions can be safely added because a backyard bin contains a lot of other organic refuse. The onions won’t harm earthworms, and they will just avoid them.

Composting Onions in the Kitchen

If you’re still hesitant to add onion waste to your compost, you could try an indoor system like a bokashi bin.

Bokashi bins are designed to be used in the kitchen as a hygienic and odorless way to produce compost. They can treat all types of food waste including our notorious onions. A Bokashi system is suited to all kinds of food waste and uses a special blend of microbes to ferment the waste into compost.

I don’t pretend to understand the science behind this method, but you can get specially designed containers and Bokashi kits that provide an easy solution to everyday kitchen scraps.

The Key to Composting with Onions

The key to effective compost is a good balance of carbon and nitrogen rich materials. This means a good variety of “green” easily rotting material, and “brown” dry matter which takes longer to compost. So long as you respect a certain balance and add onions with moderation, all will be rotten !

Fall Composting (10 Things To Do in Autumn)

10 Reasons Why Composting is Good for Plants

How To Speed Up Composting (10 Tips For Faster Results)