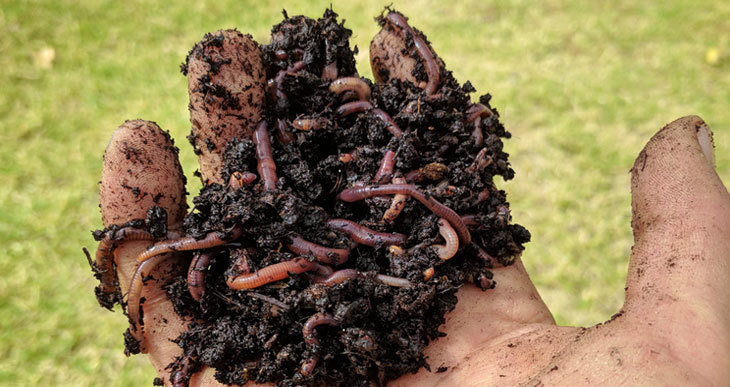 Adding Worms to Compost: Should I put Worms in my Compost Bin?

You may have heard that worms are useful little critters to have in your compost. They can play an important part by helping to decompose waste products. But do you need to add more worms to compost to achieve good composting? When I first started composting this question got me curious...

Do I need to put worms in my compost bin? It turns out that adding worms to compost may be beneficial. Certain types of worms, like red wigglers, can help speed up the process of decomposition. Native earthworms generally find their own way into an open bottomed compost bin if conditions are right.

Your compost heap is like a mini-ecosystem with a lot of other bugs, microbes, and fungi contributing to the rotting process. Worms are one of the many macroorganisms that help break up organic material. Their presence is helpful but composting occurs regardless of the number of worms in your compost pile.

That being said, worms are capable of consuming large amounts of decomposing matter in a relatively short time span, which in theory will make your composting process more efficient.

So how do you get more of these helpful invertebrates to come and join in the fun?

The idea of adding worms to compost isn’t new, but if you want to add worms to your bin, make sure you get the right kind of worms!

Not all types of worms like the conditions inside a compost bin. For example, if you decide to dig some up from your garden, they may not hang around if you just drop into an open bin. They’ll probably just wriggle to the bottom and dig into the earth. And if they’re trapped inside a tumbler they will die.

The best type of worms to add to compost are red worms known as “red wigglers”. This type of worm is well suited to eating rich organic matter and belongs to a group of invertebrates we call “epigeic”. They can tolerate a wide range of temperatures, and if you feed them with plenty of kitchen scraps and garden waste, they can consume large amounts of compostables.

"Red wigglers are said to be able to process half their body weight in food every day"!

They also tolerate crowded conditions and can grow into large populations. A small number of red wigglers will reproduce quickly. The resulting compost (sometimes referred to as vermicompost) is highly beneficial for your plants.

So where do you find these handy little creatures? Unfortunately, you probably won’t find them in your backyard. If you want to give red wigglers a try you can sometimes pick them up from your local nursery, or you can order them online (these ones on Amazon are great value and come from a well reputed supplier).

Once you’ve got some red worms, you can easily add them to a closed bin or composting tumbler, but also an open bottomed compost bin. As long as they have plenty of organic waste for food they will thrive. Introduce them to your compost by gently spreading them out. Add some small pieces of food scraps (the smaller scraps break down faster). Then cover the worms with bedding soil to prevent them drying out and to prevent fruit flies turning up for the feast.

Earthworms on the other hand are somewhat different.

A compost heap can be a relatively harsh environment for ordinary earthworms. The microbes feeding on waste vegetation can increase the temperature of the composting mass. Earthworms don’t do well in these hot temperatures compared to red wigglers which have a higher tolerance for temperature differences (they can survive at temperatures between 32 and 95°F / 0 - 35°C).

Another difference between red wigglers and native earthworms is their diet. Red wigglers will eat food waste and rotting vegetation, whereas earthworms get their nutrients directly from the soil or from composting material.

Earthworms are still a useful guest to have in your bin. It’s likely you’ll find worms from your garden inside an open compost heap. However, in extremes of heat, cold, or moisture, earthworms will prefer to leave the compost pile and bury themselves in the soil.

Why worms are good for compost

Worms are helpful to composting for a few different reasons. Worms are basically one long digestive tube.

Yep… Stuff goes in one end and comes out the other! In the process, several good things happen.

Composting material gets broken down, both physically grinded in the digestive tract and by the worms digestive juices. The worms manure (known as casts) actually comes out richer in nitrogen, organic matter, and bacteria than what went in.

Worms also improve the structure of the compost by their tunneling habits. Their tunnels allow better air and water circulation within the compost which encourages aerobic bacteria to do their job of decomposition.

​Effective conditions for composting require a good balance of organic waste, air, and water. If conditions in a compost pile become too wet, or air cannot circulate, a compost heap can become very smelly. The lack of oxygen and increased humidity will foster anaerobic (oxygen-hating) microbes which give off bad odors.

Worms improve both the physical and chemical decomposition of compost. Their casts can be used directly as compost and have some fantastic properties. It’s full of beneficial bacteria, stimulates plant growth, and can actually help protect plants against some diseases.

How to attract worms to your compost

If you have an open bottomed compost bin, you may well find earthworms roaming around inside. Since most backyard composting occurs at relatively cold temperatures, the environment inside your bin can be attractive to worms when the compost has begun to break down.

If you want to attract more of this type of useful macroorganism you could simply try to replicate the conditions they prefer.

The earthworms in your garden like soil which is cool and moist. They also prefer loose soil rather than sandy or clay-rich soil types. You could improve the conditions of the soil underneath or around your compost bin by using compost as mulch. Spreading mulch will help keep the ground cool and prevent moisture from evaporating. By doing this you create an environment more attractive to earthworms. You might even consider digging some of your own compost into the soil around the bin if your existing soil is of poor quality. This has the advantage of adding a food source for earthworms.

You should also avoid using fertilizers which may kill earthworms. Stick to organic solutions!

If you’re keen to take better advantage of your wriggly friends you could try setting up your own wormery. This is known as vermicomposting and has certain benefits.

It’s usually done in a closed container and can even be kept in the kitchen! The process is quite clean, low maintenance and creates no odors. The worm casts (“vermicastings”) and other decaying organic matter combine to create a highly prized “vermicompost”, which makes an excellent fertilizer and soil amendment for your backyard plants.

You can get a complete worm composting kit with everything you need to get started. You’ll be repurposing your food scraps in no time.

Tips about adding worms to compost

If you’d like more worms in your compost, or you want to set up a full worm composting system, here are a few tips to consider.

Compost Starters (This is what you Need to Know!)

How To Make Compost From Kitchen Waste (The Easy Way)